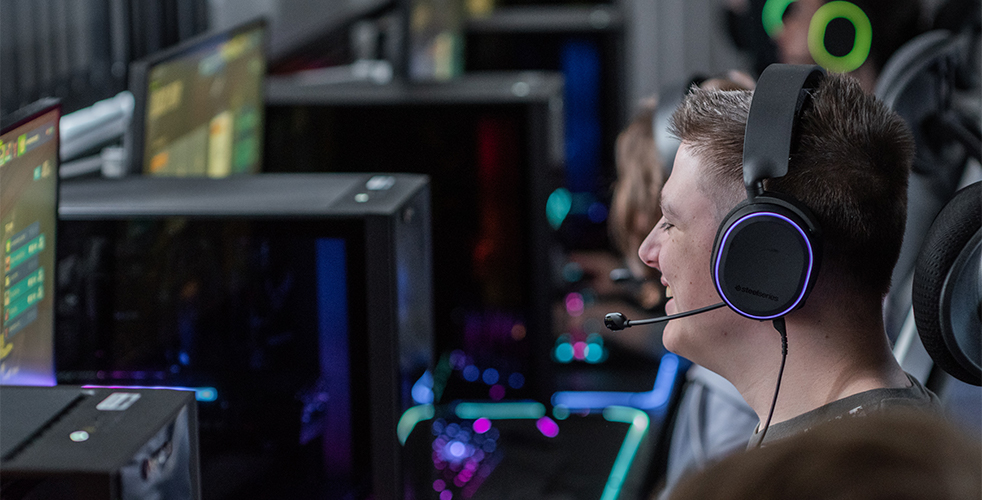 The first corporate esports festival for the whole of the South West is taking place in Exeter next year, organised by Tech South West in partnership with Exeter College.

Esports is one of the fastest growing industries in the world, with a global revenue of over $1bn and an audience of 474m in 2021, according to Newzoo. Esports first appeared as an official medal sport at the Asian Indoor Games in Macau in 2007, with the International Olympic Committee suggesting in 2017 that they may be included in future Olympic tournaments.

Exeter College will host the first region-wide corporate esports tournament in the South West in February 2022, donating part of the proceeds to the Ted Wragg Trust, which is committed to helping transform the lives of young people through learning. Working with Tech South West, the college is hosting an Esports Festival with sixteen teams from major organisations and businesses across the region competing to be the first champions of a South West-wide esports tournament.

The Exeter Chiefs rugby team are already signed up to take part.

“We are excited to be able to participate. Esports is an incredibly important sector for so many reasons. Whether you look at it from a business, participant or spectator point of view, or whether you are young or old, new to gaming or a seasoned gamer, esports is going to develop in a fantastic way. The new tech, businesses, tournaments, and the market as a whole is very exciting, with so much potential.” Don Armand, Rugby Player at Exeter Chiefs.

Exeter College will host the event in their multi-million pound Esports Academy, a new development featuring VR planking machines, simulators, and cutting edge computing equipment. The college, which has won two prestigious Times Educational Supplement Further Education Awards and been ranked ‘Outstanding’ by Ofsted, launched its dedicated academy in 2021 alongside an esports course for over 18s who wish to develop their skills in the business and management of esports.

The college also has one of the UK’s most successful competing teams, having won gold at the British Esports Championships 2020-21 LAN finals in July 2021.

Exeter College has recently been awarded the Queen’s Anniversary Prize for embedding digital technology through curriculum innovation. The development of esports at the college was recognised in this prestigious accolade.

Rob Bosworth, Deputy CEO of Exeter College, said: “Esports is rapidly developing as one of the most participated sports on the planet. Due to the way it’s played, it can be embraced by people of all aspects of society who can compete and engage on a level playing field. We are seeing this as a real change-agent for diversity and inclusivity with our students and the wider community.

“For many this will be the entry point into digital skills, but much further than that, the gaming industry is multifaceted and can involve events management, production and design, media management, not to mention strategic and critical thinking. We are delighted to be supporting the event and hope on the back of the success of this year’s launch, we will expand this even further next year.”

Esports is rapidly developing as one of the most participated sports on the planet.

The knockout competition will be streamed live for people to tune in remotely, and displayed on the large onsite screen.

Andy Doyle, co-founder of Filmily, said: “For the South West to host an event of this scale really puts our region in the spotlight.  It’s not just a sport for the major cities in the UK or for teenagers playing in bedrooms; it’s a major professional competitive sport and the South West has a community who can really be a part of it. The Filmily team are excited to be supporting the first event of this nature in the region, and to enhance the experience for competitors and spectators using our innovative fan engagement software.”

Caroline Orr, marketing director of Astley Media, the official Marketing Partner for the Esports Festival, said: “The new Esports Academy at Exeter College provides a great platform for people to learn about the marketing and management potential of the esports sector. This exciting new tech event will help to showcase this fantastic opportunity and place the South West on the map within the rapidly growing esports world.”

Jordan Westcott, operations director of Timewade, said: “We’re delighted to be taking part in the South West’s first ever region-wide corporate esports festival. As a local IT support provider, we’re passionate about new and emerging technologies and it is fantastic to see esports, one of the fastest growing industries, being offered to students at Exeter College. The festival is set to be a fun occasion and a chance for our team to show off their esporting skills. And, for local people to learn more about the College’s new Digital and Data Centre and the opportunities available at the Esports Academy.”

Tech is already the fastest growing part of the South West economy, with esports expected to play an increasingly significant role in the sector in the coming decade.

Dan Pritchard, co-founder and director of Tech South West, said: “The esports industry is thriving, with investment in the sector increasing year on year across the globe. The South West is already at the cutting edge of tech across a variety of specialisms – from marine tech to software, cyber and renewable energy. It’s fantastic to add esports to that impressive portfolio of innovation, and support the growth of what could be one of the UK’s key esports hubs at Exeter College.

“Bolstering the tech talent pipeline in the region is a core part of our work at Tech South West, alongside improving business support for tech companies and helping tech firms to reach investment. The new Esports Academy at Exeter College is a brilliant facility and will be instrumental in supporting young people to find great careers in tech.”

Hannah Rowe, director of Rowe IT, said: “Competitive gaming has been growing since the 1980s and encourages social interaction, strategic thinking and teamwork. Plus it is fun! As a software development company, we are beyond excited to be one of the sponsors and our team is in training!”

Find out more about the event at techsouthwest.co.uk/esports-festival

Due to incredibly high demand, team spaces for the February 2022 event are now fully booked. If you would like to join the waiting list, receive further updates or find out more about how you could sponsor the event, get in touch at hello@techsouthwest.co.uk